This is probably one of the best keynotes I’ve ever attended (virtually in this case): inspirational, well structured and full of content and ideas. The speaker is Dr. James Paul Gee, a professor specialized in language, learning, and digital media, particularly video games. The event was the annual Games for Change Festival (June 20, 2012). Games for change is an organization that globally advocate for supporting and making games for social impact. I found this revealing presentation among the activities of the Games MOOC I follow.

Although the speech refers to game-based learning and games in general, professor Gee makes enlightening considerations about education, informal learning, nature of knowledge, among others. Before including the notes of the keynote, I would like to underline some quotations from his speech: 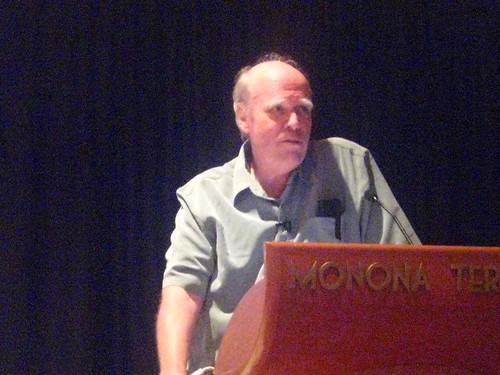 Gee highlights the importance of social interaction as part of the game experience. As Gee indicates “people play together as they share passion to solve a challenge”. He distinguishes between the little g game “game” and the big G game “Game”. He (2008: 24) defines both concepts as follows:

A big G Game is the result of the creation of an Affinity Space plus a set of principles. Gee (2004: 67) defines an Affinity Space as “a place or set of places where people affiliate with others based primarily on shared activities, interests, and goals, not shared race, class culture, ethnicity, or gender” (quotation taken from Wikipedia).  Somehow it constitutes an space for informal learning. This keynote presents the principles that make a big G Game.

(Note: all the items below are taken from the keynote. Sometimes I include comments or quotations from the speech of Dr. Gee):

Finally I’d like to include this quotation about knowledge and disciplines: “In a real big G game you are not learning a discipline, you are learning multiple skills, social and emotional intelligence, collective intelligence.”

© Esteban Romero. Unless otherwise noted this site and its contents are licensed under a Attribution-NonCommercial-ShareAlike 3.0 Unported license.