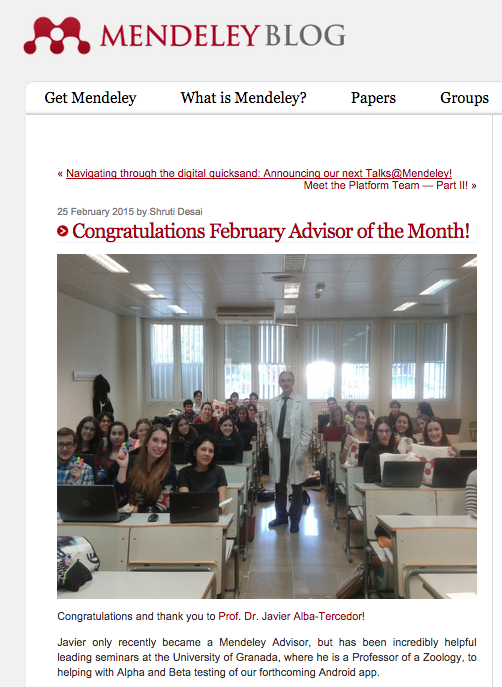 I started to study biology at the Univ. of Granada in 1972, and immediately I was admitted as “internal student” at the Department of Zoology. So I was involved in research helping to PhD students when I was quite young, so I started to do work on my master thesis well in advance. In Spain at that time studies of Biology lasted 5 years, and I started to do research for my master thesis when I was finishing my 3rd year. That’s summer I followed an English language course in the Swan school in Oxford. For me it was a new windows open from where observe the world. I took a lot of profit of my summer there, it was the first time in my life I could use an incredible huge library, the Bodleian. So I used my lunch time to consult, and to collect bibliography on my main interest since then (aquatic insects and river ecology), and by then I had the incredible experience to visit the library of the Department of Entomology at the British Museum in Oxford. An now, with life perspective, I know how much influence this summer had in all my life as a researcher, and I will never be grateful enough to all the staff of both institutions that help me to find what I needed even when my English skills were quite poor J.

So, once I finish the Biology studies in 1977, simultaneously I could defend with honours my MSc thesis and publish some earlier papers. All that gave me merits enough to win a position as assistant teacher for practical classes, and with this contract I could survive to present my PhD on the taxonomy and ecology of mayflies in 1981. Immediately after it, I decided to do research outside my country, and I have been doing research in different labs from Europe (former Czechoslovakia, Poland), Australia, Canada, USA. Finally, I win (in public competition) a position of Professor of Zoology at the University of Granada in 1998.

For more curious details just watch this video , and/or visit the Mendeley’s profile.

How did you get into your field and what is your research story?

I decided to be a zoologist, in fact an entomologist when I was a teenager, even when my family was almost sure I will became a medical doctors, or even part of my father’s family wanted to convince me to study laws (vídeo). So I decide to study Biology, before to start the high school. I was fascinating with all the biological phenomenon, with the life, nature, but specilly insects attracted me. At that time I remember to read with a great interest and admiration different volumes of “Entomological mmemories” of the french author Jean-Henri Casimir Fabre. Who make dreams to became a well know entomologist who will discovers new species. So I must confess that at least, with respect to discover and describe new species my dreams become real, because I described species from all the continent, except Asia! Where never have been doing research.

During the last few years I discovered the microtomography as an impressive tool to look the animals as we never could imaging, so I’m an enthusiastic researcher users of the technique, and as many people spend hours playing computer games with video consoles, I do the same but scanning and reconstructing volume renderings little animals, plant, fossils, tissues and even we investigated volcanic rocks to look inside the incredible microorganism life (similar of what it is expected to find in Mars). So I have the facility to wake on lan from home the computers of my office and lab. So I can scan and reconstruct afterhours. But for me as it has been always this is more a hobby than a job.

Where do you do your research/work the best? What kind of environment suits you?

As a zoologist that have been working most of my life on bioassesment of water course by using the macroinvertebrates I have been forced to work a lot in the field during sampling campaigns. However every day in the field need many days to study under the microscope to identify the caught material. So our work is a mixture, with but with many hours of lab. To work in the nature, and be in a river inhe field may sound great for everyone. However, during sampling campaign researcher we are forced to do a much sampling sites a day as possible, os we don’t have much time to enjoy the beautiful places we visit. Moreover, in autumn and winter cold days stay all day long working dump into the cold water does not result as nicer many people imagine our work.

But just answering the question: the best place to work is the place where nicer people are. So, having a friendly collaborative environment researchers, we can feel happies doing our hard daily job. The nicest place could be the worst and viceversa if the companions and colleagues are not as good as desirable. In fact it is true that we need means (instrument, technicians, etc.. ) to develop our research. However, long ago I realized that the fault of means it is quite often taken as an excuse to hide our own incompetence. I have a pice of wood in my office with the following phrase that I did find long ago somewhere: “Give me the technology I’m applying for and I will demonstrate my complete incompetence”

How long have you been on Mendeley and what were you using prior to Mendeley? How does Mendeley influence your research?

What happens to me with Mendeley it is exactly “a love history”, I felt in love with it in the “first sight”!. I did not knew it until very recently (in November 2014), until it I was using a software I computed ong ago by using DBASE (II, later III) still running in my computers where manualy I was adding the bibliographical references, and I had code tags, and numbers corresponding with the paper copies or reprints I have in my “physical files”. That programs even had a primitive way to make the bibliography when writing a papers Also to retrieve bibliography from web databases I had been using Endnote and Procite. So, in November 2014 I had the opportunity to attend a two hours seminar organized by Dr. Esteban Romero a teacher of our university. Before to attend he distribute a nice short introductions to Mendeley, and after read it I was motivated enough to spend four hours working with (I entered in Mendeley’s site, setup the desktop application, the brower importer and the plugin for MSWord). So the day of the seminar I was so excited and enthusiastic, in summary I was totally engaged with Mendely!. Because I was clearly aged (older) that the others attenders, most of them started t think I was part of the panel of Mendeley’s presentersJ. Simply I discovered a new, way to have what I dreamed that it could be, but real.

Since them I have been doing bibliographic fast search and maintaining new topics of collaborative research thanks to the possibilities that the shared groups have. And the possibility to have it in all my devices, including my tablet and smartphone help me to read in everywhere. And no worries in case I lost or anyone steel my computer, or laptop.: I’m sure I will continue having it.

Why did you decide to become an Advisor and how are you involved with the program?

Normally I’m extremely enthusiastic with anything I considered that worthwhile, as is the case of Mendeley. Since I knew it, I was convinced of the possibilities that this as a tool for research, so I thought I had the moral obligation to spread out its knowledge not only to my colleagues, but specially to our students, our future researchers. And I started to do proselytism with so much energy and enthusiasm that some people are wondering I’m paid for that. But believe me, I do it happily because I’m totally convinced of the goodness and possibilities. In fact, I love your phrase “It’s time to change the way we do research”. Thereafter, I discovered that I could fit perfectly in the advisor profile you could be looking for, and I applied explaining why and what I could do. Moreover, I have a lot of experience (and I like it) as beta tester of different scientific software and web applications, so why not to collaborate with you, and at the same time being one of the first to test new versions.

What academic/researcher/librarian would you like to work with or meet, dead or alive?

This is probably for me the most difficult question to answer. I was tempted to say “I don’t know”, but now I think that if any machine of time would exist I would have curiosity to visit Charles Darwin at the latest stage of his life and stay talking with him all the evening. Just listening…

What book are you reading at the moment and why?

An interesting book entitled .”Caddisflies: the underwater architects”. Because I’m writing now a paper on how these aquatic insect build in an special way their cases as an survival strategy. But, in the bed before to sleep I’m reading a thriller novel by Åsa LarssonJ

What is the best part about working in research?

You always maintain interest, as much as you know as much you need to know. I use to say that to be a good researcher the most important quality is never permit that disappear the expression of the child that all we have inside. So anyone that maintain the joy for life, and the typical child curiosity fit in the conditions I consider a research should have, and the most important will have fun while working.

The best part is the possibility to travel and contact people around the world that no matter the language, religion colour, etc, wich ones to share the passion and enthusiasm!, and where it is possible the wonderful human being nature.

And the worst/most challenging?

The worst probably is the unfair competition every researcher has to fight along his/her life. This unfortunately and more commonly arose from the most close related colleagues!

What is the one thing you want people to know about Mendeley?

The message I transmit is: “Mendeley is the key permitting to open the door to discover the existing research world, no matter the topic you are interested in”.